Soul Wars (also known as SW) is a minigame that was released on 20th of June 2013. Similar to Castle Wars, it is a team-based minigame that lasts thirty minutes (1500 seconds of gametime + 300 seconds waiting room time) and is playable on World 1. In Soul Wars, two opposing teams compete against each other to gather soul fragments and offer them to the soul obelisk in order to weaken, and ultimately defeat, each others' Avatars using a combination of combat and Slayer.

This is a safe minigame. if you die, you will keep all of your items. Players will respawn in a graveyard that is controlled by their team, and can rejoin the game after 15 seconds. Hitpoints, prayer points, Summoning points, and run energy are all restored when a player dies and at the end of each game.

The Soul Wars minigame can be reached by using the Minigame Teleport in your spellbook.

Upon teleporting there, you spawn near a chest that can be used for banking, along with Nomad the rewards trader.

Walk north and use the Guthix portal which sets you to a random team, or use the barrier of your choice. (Red and Blue)

Make sure to un-equip your cape before entering! 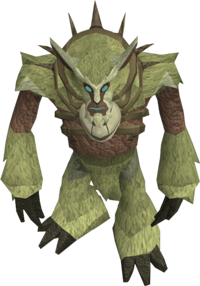 The Avatar of creation is fought by players on the red team attempting to win the game, it hits extremely high if the player is not protecting from melee. Players often bring good mage deflective gear incase they get barraged by the opposite team. There was a time when the avatar of creation dropped ferocious rings, this was later removed and cannons were disabled in Soulwars. 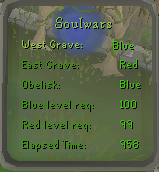 Players can obtain Soul fragments by killing the beasts located inside Soul Wars. The beasts include Pyrefiends and Jellies. These monsters always drop them and are a good source of experience for players wanting Zeal and experience at the same time. Though remember getting caught "afking" in Soul Wars is an instant 48 hour ban.

Soul fragments are stackable, so players can accumulate many at one time. Soul fragments along with all other items will be kept on death inside the Soul Wars minigame.

The objective of Soul Wars is to defeat the opposing team's Avatar more times than they defeat yours over the span of 20 minutes. The Avatars begin each battle with a Slayer requirement of 100, making them immune to all attacks.

In order to reduce their Slayer requirement, players will have to kill Pyrefiends or Jellies to gather Soul Fragments and offer them to the Soul Obelisk located in the center of the map. In order to drop the enemy's avatar one level, ten Soul Fragments must be used on the Obelisk.

There is an activity timer that will kick you if you do not do anything for 5 minutes. Players can maintain activity in several ways: Attacking other players, killing Pyrefiends and Jellies, and attacking the enemy Avatar.

The capes worn in Soul Wars act like team capes, meaning that those players wearing the same colour cape as you (meaning they are on your team) are blue dots on the minimap, and the other team's players are white dots. That means attacking is the default left-click option on any player of an opposing team, which is useful when one does not target a certain player and is in a crowded place such as the Soul Obelisk.

You are meant to fulfill a role that is either: Smiter, Tank, or Shard farmer.

Generally a level 100+ combat level'd (cb'd) person with higher level gear and good accuracy and he uses the prayer Smite or Soul Split in an attempt to shut down a Tank's protection prayers and nullify his Divine Spirit Shield's 30% reduction of damage effect.

Usually a maxed out character that dons full Nex armor, a Staff of Light, a Divine SS, and an inventory nearly filled with Saradomin brews, Prayer renewals, or Prayer restores. Since they are usually being attacked by 6 or more people, they cannot truly attack the Avatar - as they are usually drinking Saradomin brews - Tanks, therefore, use the Bolt Pouch's ability to bind a monster that can attack the Avatar.

Shard farmers can be any level player who isn't suitable for PvP as they have not the best armour, weapons, or may not have much experience with PvP. They are generally the army as they swarm invaders and attack the NPCs that are on the sides of the Soulwars map to gain Spirit shards. Spirit shards are used to reduce the total level of Slayer to attack the opposing team's Avatar which, when it respawns, requires a Slayer level of 100 (Impossible to attain). 10 Spirit shards will reduce the level by 1. Shard farmers are not usually attacked and they also pray Melee as there are no NPCs that use Magic or Range.

Upon entering the minigame, you will have the opportunity to pick up Bandages from the table inside the barricades; Bandages will heal a player by 15 hitpoints. There are barricade and explosive tables but neither are currently functional.

After finishing a Soul Wars game, you receive Zeal. 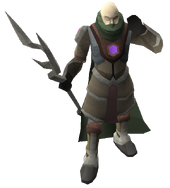 You can spend these Zeal by talking to Nomad, the rewards trader.