Prayer is a useful skill to train, and one of the basic combat skills that benefits all classes of players: Melee warriors, Archers, and Mages. It can save your life in and outside of the Wilderness. Prayer can be very expensive to train in Soulsplit, but it is very rewarding for those who do choose to invest their time and / or money into it.

In spite of the high level requirement, the curse Prayer book has many powerful Prayers that can greatly benefit a character, such as Turmoil, Soulsplit, etc., and have many uses in Player versus Player (PvP) combat as well as Player versus Monster (PvM) combat.

Generally, the higher the Prayer level a Prayer requires, the faster it will deplete your Prayer points.

The regular Prayer book is unlocked at level 1 Prayer; meaning it is available to new players as well as players whose Prayer is level 99.

There are three methods of training the Prayer skill: burying bones, using bones on Altars for increased EXP, or using a Bonecrusher.

This method is the most basic, requiring only bones to carry out. Simply acquire bones, place them in your inventory, and left-click them to bury them into the ground. You can bury them as you collect them from monsters, or store them up in your bank, withdrawing 28 at a time, burying, and repeating the cycle.

A more efficient way is using the bones on an Altar. This will increase your EXP gained per bone, but often at the cost of longer trips. If you find the trips to not be an issue, you will find the saved bones and faster EXP worthwhile.

Another great tip for using this method is wearing a halo (Saradomin, Zamorak, or Guthix) wile you are doing this. Why a halo? Halos (when equipped) gives you the ability of infinite run and a 42% chance to save bones. For the money you spend on a halo you can easily make up in the bones it saves and you can always sell it when you're done.

The Bonecrusher is a Dungeoneering shop item that can be purchased that automatically buries bones for you whenever you kill a monster when you have the Bonecrusher in your inventory. The best method is by using the spell 'Ice Barrage' on skeletons at Ape Atoll as the number of bone drops is very high, they are aggressive, and they are easy to kill.

Here is a picture of a player using Ice Barrage on Monkey skeletons in the Ape Atoll dungeon: 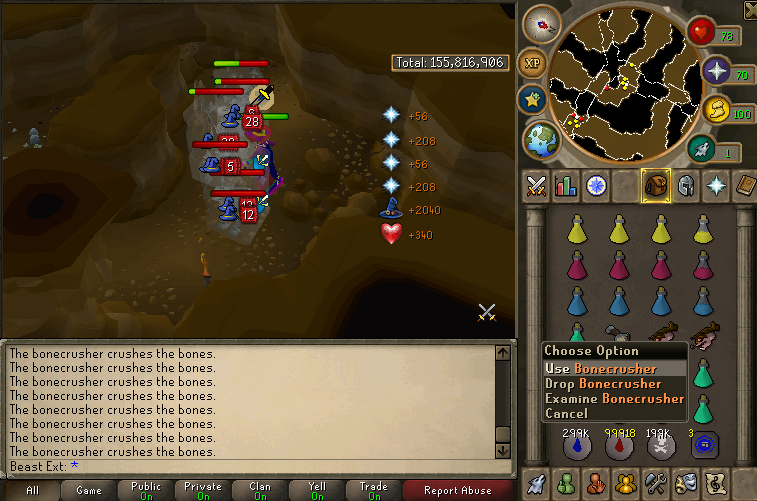 However, Skeleton Monkeys are not the only option. It is advisable to take a Bonecrusher with you whenever you plan on fighting monsters, as it will save you banking trips to stash the bones, and will save you the effort of picking up the bones and taking the time to bury them.

Experience recieved when using bones on an Altar:

Steaming from the March 11th 2014 update no one (not even members) have infinate prayer, below are the new prayer drain rates.

1.) Use the altar found in the starting room of all small floors of Dungeoneering

2.) Go to the Sailor, the man in blue robes, found in: South Neitiznot, behind Edgeville bank, or Varrock square (not ::market), and then use the teleportation option "Chaos Altar" to be teleported beside the Curses altar.

3) There is also a chaos alter located behind the EAST Falador bank.