Cooking is the skill in Soulsplit that allows a player to cook raw foods for many uses. Uses include restoration of HP, boosts in certain skills, as well as gaining more EXP for higher level foods to cook. Generally, higher tier foods will restore a higher amount of HP. There are many types of food to cook in Soulsplit.

Players can use raw foods on either a fire or a range to cook them. Higher tier foods will generally heal more HP, and will require a higher Cooking level to cook. Ranges are better to cook on, as they reduce the amount of times a player burns their food.

There are two main ways cooking foods. One of which is cooking on a fire, and the other is using a range. Using a range to cook is more viable as it will prevent the player from burning more food.

Fires can be made by any player by using a tinderbox on any log. This allows for flexibility in where you want to cook, as well as Firemaking EXP.

Also, using higher tier logs will result in a reduction of burning food.

Using a range limits player to where they can cook, but will benefit them in terms of EXP and not burning as much food. A range can be found on the minimap with the cooking pan icon (

A player can also use the Clay oven located in South Neitiznot.

Interacting with Claus the Chef (who can be found in Catherby) will open the Cooking and Fishing Store, which provides many basic Cooking tools, equipment, and materials to produce foods. 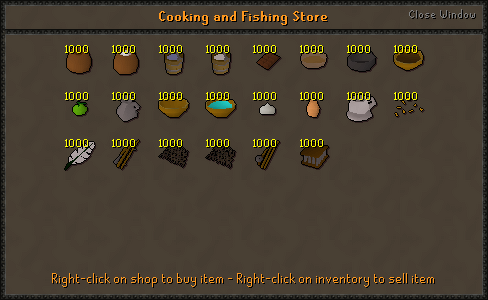 One can make a variety of pastry doughs from using a Pot of flour with a water vessel of some sort (Bucket of water, Jug of water, etc) and choosing the desired type of dough.

Bread can be made at a Cooking level of 1. To do this, just use a Pot of Flour with a water vessel and chose the "Bread dough" option.

You can cook the uncooked Bread dough on a range.

Pizza bases can be made by using a Pot of flour with a water vessel. A player must have a Cooking level of 35 to make one. By combining it with a Tomato and Cheese, a player can make an Uncooked pizza. They must add the tomato first before the cheese. Players can also add a topping to uncooked pizzas before cooking them.

A player can cook the Uncooked pizza by using only a range.

To make cakes, a player must combine an Egg, a Bucket of milk, and a Pot of flour in a Cake tin to make an Uncooked cake. From there, a player can cook the Uncooked cake on a range to finish the cake. To make it a Chocolate cake, just add either a Chocolate bar or Chocolate dust on the finished cake.

The most commonly used food to train Cooking is fish. Fish can be obtained in multiple ways, but the majority of them are brought into the game by Fishing. Fish can be cooked on either a fire or a range.

The following is a table that shows what fish can be cooked, and what Cooking level is required to stop burning them.