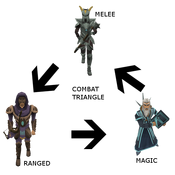 Combat refers to a triangle system of attack styles that overlap each other, as well as the Defence and Hitpoints skills. Combat is used to attack NPCs and other players, or even assist in other Skills. In any combat scenario, players or NPCs attempt to inflict damange on the opponent. There are three different types of attack styles: Melee, Ranged, and Magic.

The Melee attack style consists of two skills: Attack and Strength. These two skills are entirely combat based and can only be trained by either attacking players or monsters with Melee weapons, or hitting/kicking them with their feet/hands. Unlike Magic and Ranged, players that use Melee cannot damage other players or monsters from a distance. Melee is strong against Ranged, and weak against Magic.

TheRanged attack style consists of only the Ranged skill. This skill is entirely combat based and can only be trained by either attacking other players or monsters using a bow, crossbow, knives, or other throwing weapons such as javelins or throwing axes. These weapons can inflict damage from a distance. Note that some weapons require ammunition in order to be used. Ranged is strong against Magic, and weak against Melee.

The Magic attack style consists of only the Magic skill. This skill is mainly combat based, but players are able to use this skill to cast spells that are non-combat related. To train this skill, a player can use Runes to cast various spells (both combat and non-combat related) in a Spellbook to gain experience, as well as using Staves. In combat, players using the Magic attack style can inflict damage on other players or monsters from a distance by casting combat related spells. Magic is strong against Melee, and weak against Ranged.

Defence is a skill which reduces the accuracy and damage from another player or monster. To train Defence, select the defensive attack style in the Combat tab (the option varies for each equipped item in the Weapons Slot), and attack a monster or player. With a higher defence, more gear is available to wear.

Hitpoints determine the amount of damage you are able to take. You can gain experience for this skill by inflicting damage on a monster or player. Within Soulsplit, you can have the Hitpoints displayed in a classic view, up to 99 total, or the Runescape Constitution view, 990, with hits being increased 10x1.